A Shadow in the Dark 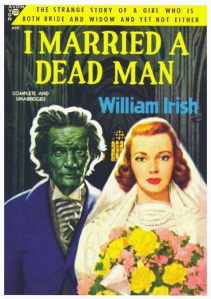 Cornell Woolrich’s 1948 novel I Married a Dead Man provided plot inspiration for two of the films that I have included in this project. The book was originally written under Woolrich’s William Irish pseudonym, and the initial scenario is about as solid and interesting as any produced during Woolrich’s career.

Helen Georgesson is impregnated and abandoned by Steve Georgesson, who gives her nothing but a couple of dollars and a train ticket out of town. While on the train, Helen meets Patrice Hazzard, a pregnant young woman who married in to a wealthy family and has a much brighter future. After the train derails, Helen is mistaken for Patrice, who died along with her husband Hugh. Faced with an uncertain future for her newborn child, Helen impersonates Patrice, becoming a beloved member of the Hazzard family and drawing the romantic interest of Hugh’s brother Bill.

Helen’s new life is threatened by the return of Steve, who wants to take advantage of Helen’s newfound status by victimizing her new family.

The book has heavy themes of identity and class-status. Woolrich makes it apparent that Helen Georgesson does not have much of a future, but that Patrice Hazzard, simply by nature of being rich and married, has all of the potential in the world. That does not stop death, and Helen quickly discovers that even the rich can be haunted by their past sins, even after Helen and Bill discard of Steve’s murdered corpse.

The novel contains some wonderful, lyrical writing, particularly the repetition of phrasing, which gives a sense of Helen’s deteriorating emotional state due to the stress of the situation, as well as mimicking the rhythmic throb of a train. In the opening, Woolrich writes that “the summer nights are pleasant in Caulfield. But not for us. The winter nights are too. The nights of fall, the nights of spring. Not for us, not for us” (147). Bill and Helen are being torn apart by the general suspicion of each other. It is destroying their marriage, and Helen knows that one or the other will eventually leave. That sense of dread drives the rest of the narrative.

In standard Woolrich fashion, unlike the film adaptations, the novel does nothing to brighten their apparent future. Woolrich closes with “We’ve lost. That’s all I know. We’ve lost. And now the game is through” (318). Mistrust, stress, and dark thoughts have taken their toll. There is no undoing that. Even if the police don’t suspect them, they will always suspect each other. In many ways, Helen and Bill are just as dead as Steve.

The book is bleak and wonderfully written. Nevins write that “This hardly seems the kind of novel that would command Hollywood’s attention”(473). Respectfully, I disagree. Hollywood loves an interesting, flexible scenario. In hindsight, it is no surprise that the book was adapted for Hollywood in to such diverse movies as film noir classic No Man of Her Own and the mid-nineties romantic comedy Mrs. Winterbourne.